Melissa McQueen is a passionate educator and outdoors person. She has climbed 11 of Colorado’s 14,000-foot peaks and 19,330-foot Mt. Kilimanjaro, in addition to attempts on Mt. Rainier and the Grand Teton. Her frostbite story was first told on Colorado Public Radio’s Here’s What Happened pro-gram and she was featured in Backpacker Magazine’s 2012 Survivor Edition. She unofficially holds large numbers of “firsts” and “speed records” for two-toed people. She is a member of the American Alpine Club and volunteers each summer with Big City Mountaineers, taking groups of inner city high school girls on their first backpacking trips.

Brad and Melissa live in Denver, Colorado, with their two children. 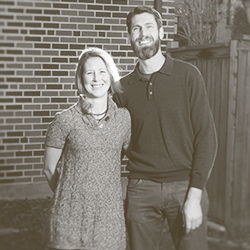