Chris Ransick, Denver Poet Laureate from 2006-2010, is an award winning author of five books of poetry and fiction, most recently Language for the Living and the Dead (2013). He has worked as a journalist, editor, professor, and speaker, and has served on his city’s public library board, his state’s humanities board of directors, and on the PEN Freedom to Write Committee. His first book, Never Summer, won a 2003 Colorado Book Award for Poetry and all his titles are available in new editions from Conundrum Press. Since 2005, Chris has been a faculty member and Book Project Mentor at Lighthouse Writers Workshop, Denver’s reknowned independent creative writing school, which awarded him the 2013 Beacon Award for Teaching Excellence. Chris Ransick passed away in 2019. 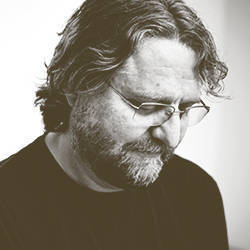